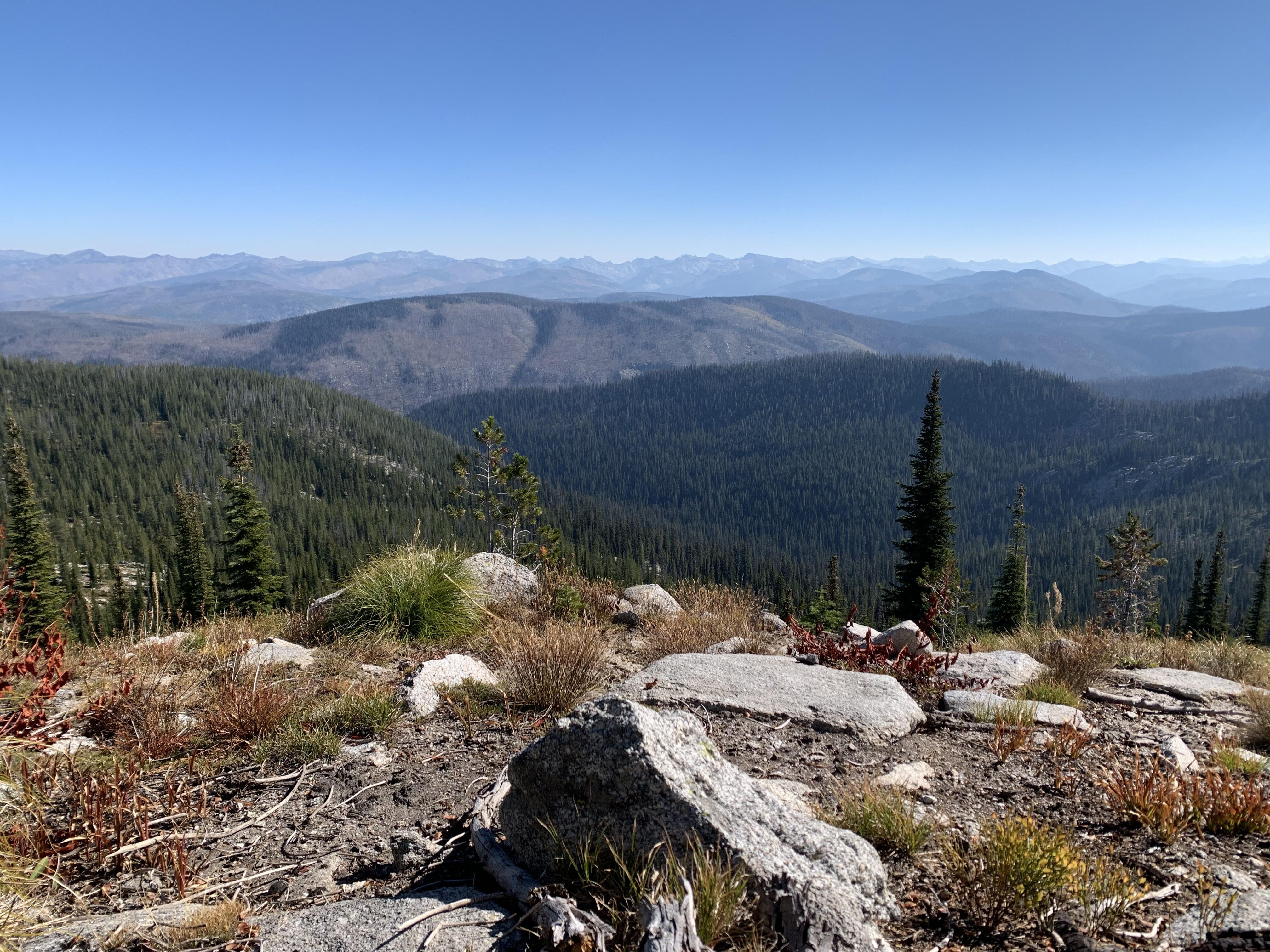 This hitch we were sent to the Pouliot Trail #30 out of the Kooskooskia Meadows Trailhead in the Selway-Bitterroot. The trail was very pretty and we enjoyed it very much despite the consistent climb. The climb rose up to a beautiful ridge, where you could see the forest below, mountains ahead and so much blue sky. We were probably around 7000 ft up, but there must be plenty of moisture and sunshine because the trail was not sparse on the shrubs. We were grateful for the shade, however, the temperature changes between shade and sun were very noticeable. Especially when the wind whipped around we needed to suddenly throw on another layer. The weather stayed sunny during the day and the stars were out at night. Pretty cold in the evenings, and mornings but by this point, I think we were used to it. We were a backcountry crew so camping near the rig was really nice. No long walks to the bear hang in the morning/night or garbage to worry about. And we even sat in the rig to eat when it was super cold! Wow.

There were honestly very few trees down on this trail, so we did a lot of hiking. There was also no flat area with any source of water up the trail, so the idea of a bumping camp was not considered. We were there for only 4 nights so I figured there would be hopefully enough work to keep us occupied and closer to camp. But these trees were live, smaller, and turns out they weren't falling over constantly like the dead lodgepole that we were camping around for most of the season. Before we left I thankfully had the thought to fill up all of our 5 gallons (we had 4) with water and just kept them in the rig at the trailhead camp. This was super clutch because the only water around was this very silty marsh that probably would have immediately destroyed our filters. Isaiah sort of fell in when he was trying to balance on a log, and his foot squished into the muck, which came up to his knee.

So, we got lots of hiking in, took in some amazing views, and eyed Graves Peak longingly. We had a lot of fun cutting and chopping on our last few days of work. My co-lead Alex came back for our last night and made us pancakes and sausage. That was super nice. He was on vacation. Overall, this hitch was a very fun, rewarding, and memorable way to end our 2022 field season. Go Powell Rangers!