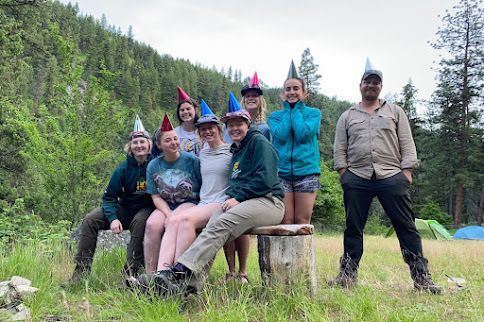 Spirits were high from the very beginning of our second hitch. We all spent a few days together over our weekend after coming from an awesome first hitch. The first night of hitch was our crew lead, Liesl’s birthday. None of us really communicated to each other what we were all bringing so we had a lot of snacks! We were in the front country for a few days so we figured we had time to eat it all. We had three packs of Oreos, frosting, Nilla Wafers, brownie mix (that was unfortunately never used), goldfish, and some random other foods. We had some party hats and a small pinata, all to celebrate Liesl. It was a lot of fun. Peter was camping with us a few nights, and so were staff members Kelsey and Darcy. We all hung out and ate sugary snacks together. Kelsey warned us that the goop we were all gopping up was going to suck for some reason at some point because the goop will getcha.

The next few days of work were really hard for most of the crew. Audrey was having a really bad reaction from their allergies and that was making it really hard for them to breathe as we hiked up 2000 feet in about a mile, while also carrying a chainsaw. Eventually, Kelsey carried the chainsaw for Audrey because it was too difficult for them. The following day they woke up even more sick than the day before. Maddi also woke up not feeling good and said she had been vomiting all night. After they both talked to Darcy and Liesl, it was decided that they should stay at camp for the day before we hiked into the backcountry to prevent them from getting worse. So the rest of us went along with our work day while they stayed back.

The day off was very helpful for their recovery because they both got to hike out into the backcountry the next day with us. This hike was going to be the longest we had done so far this season as a crew. Not only was it the longest, but we had to be super tedious about our steps because we walked through so much poison ivy on that trail, the whole seven miles to camp.

We finally arrived at camp later that day. The next day it began to rain and did not stop for three whole days. The rain was not just sprinkling rain or even moderate rain. No, for the majority of those three days, it was a hard downpour. Nothing was staying dry and no one's rain gear was cutting it. We had all been soaked through on day one of the rain and it was not warm out by any means so nothing ever dried, even if we hid things under our kitchen tarp. There was also the possibility that we all had been exposed to poison ivy and we were all trying to be so careful when handling our clothing, boots and gear. On the second super rainy day, Maddi couldn’t get warm. As we were concerned about it developing into hypothermia, we sent her and Kirsten back to camp to help Maddi dry off and get warm again. Maddi ended up being fine the next day and we hiked through the rain one more day.

The next day it finally stopped raining but we weren’t trusting that it wasn’t going to rain later in the day, so we all left our phones in our tents. What a huge mistake that would turn out to be. Our goal was to hike up to an airstrip and clear the trail leading up to it. We only had to cut one tree halfway up. But up to that airstrip was the most beautiful view most of us had ever witnessed. It was breathtaking, and none of us had a way to even attempt to capture the view. So we all stood there and took Wilderness Appreciation Minutes, or WAM moments as we call them. We made it to the airstrip by lunchtime and had lunch up there. Then spent the afternoon brushing on the way back.
Our hike out of the backcountry was stressful again because of the poison ivy. But we made it out unscathed, none of us got any symptoms of poison ivy. We were so surprised but so grateful. Seeing our rig, Dolly, is our favorite moment after a long hike out of the backcountry.