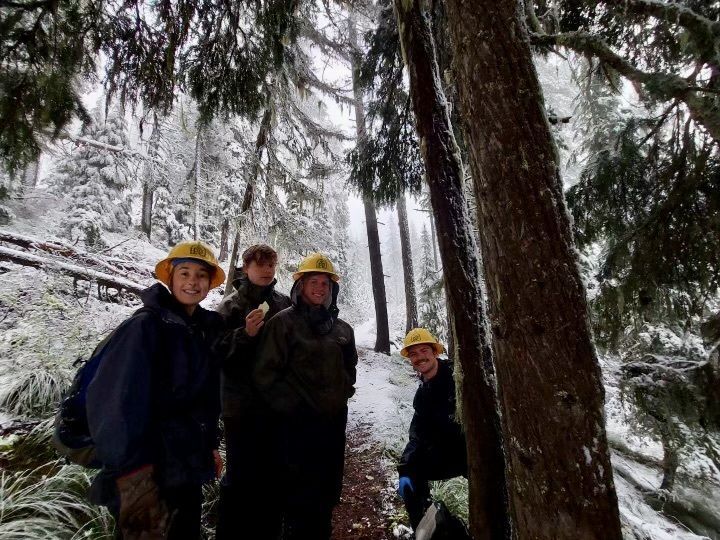 The Wayside Grill in Trout Creek happens to be our landing site after an abbreviated yet educational work day on Wanless Trail. We may have spoken it into existence, but hypothermia is the headline for this second day of a four day hitch. It was a perfect storm (ha ha) for a case of the chilly willies. Waking up around 5:30 to get a head start on the 10 hour day was a challenge in itself. When paired with the relentless rain and 40 degree temps, we were cruisin' for a bruisin'. Spirits were up, and we were making the most of a less-than-ideal morning. But as we neared the top of our 2,700 foot climb, the steady rain transitioned into 5 inches of fresh white stuff.

It's hard to differentiate between rain and sweat, but after hiking straight up for four miles in rain gear, a safe bet would be a mix. A wintery mix. Regardless of the source, this moisture combined with the sudden drop into the 20s presented some issues for some of the less prepared crew members. It became clear that the only responsible course was back down the hill. Fast forward 20 minutes. After stripping him down in the middle of the trail and turning him into the kid from A Christmas Story, we finished the knee busting descent, stuck him in the heated truck and, and force fed him any warm thing we could find. Even though he was in rough shape, he's tough, and we could tell it wasn't life threatening. But it easily could have been. For those observing and experiencing this hypothermic event, it was educational in a way that a session with Wild Bill could never be. I don't think any of us will be forgetting dry layers any time soon.