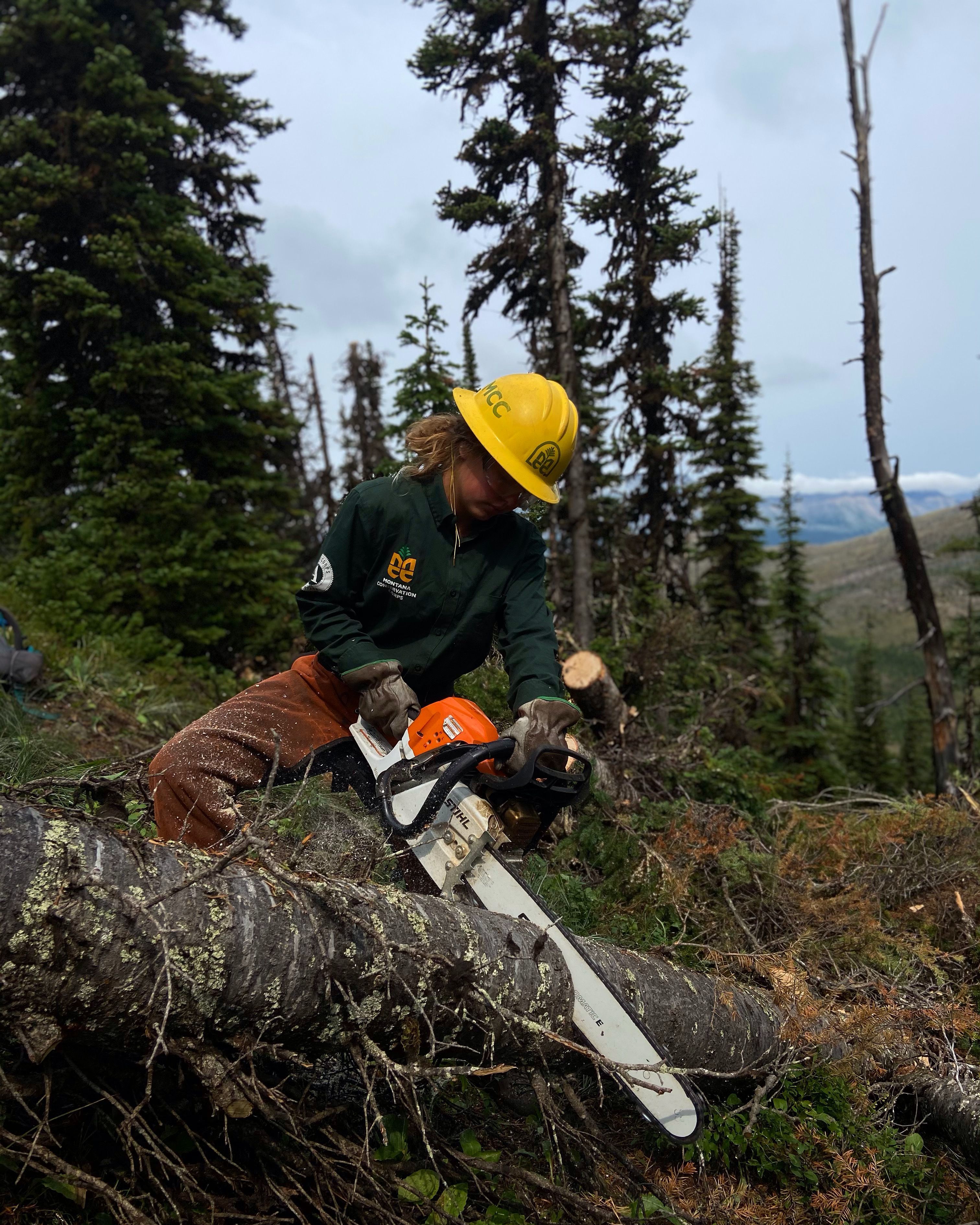 In mid June my crew was heading to our worksite, along the Highway 2 Corridor that separates the Flathead National Forest and Glacier National Park, when I saw Mount St. Nicholas for the first time. It was nothing like I’ve ever seen before with it’s sharp jagged edges that seemed to touch the end of the sky and a magnificent peak that draws ones eyes. I knew I had to climb that mountain.

About a month later I found a partner and set off on this adventure. Getting to St. Nick was not easy; we scaled up waterfalls and walked in water for hours, then it switched to endless bushwhacking, which was an intense mental game. The brush was so thick that you can only move inch by inch. When we finally made it to the basin of the mountain, we felt like we had just gone to war, but it was so rewarding to not only see the beautiful lakes and waterfalls but also to know that we were going to climb up this peak.

The exposure was unreal and it felt unreal to be so high up, climbing something that looks impossible. Reaching the top was one of the most rewarding things I’ve ever done. I felt so alive, I felt so free.

We rappelled down then decided to hike down a different way. Climbing up and over hundreds of fallen trees and walking through fields of massive ferns and other plants was extremely mentally exhausting.

Around 9 p.m., everything changed. We were about half a mile to a trail and I was trying to get across a fallen tree. I put my hand on the tree and tried to swing my legs over. My heavy pack was pressed on the tree and I heard this weird loud spraying sound, when I looked down I saw a huge orange cloud spraying me in the face and covering my entire body. I hurled myself onto the ground and in a matter of seconds I was in the most excruciating pain I’ve ever felt. It felt like my flesh was melting off of my bones, my eyes were on fire and I couldn’t see. I remember laying on the ground screaming and shaking uncontrollably and my eyes were oozing bear spray down my face. My partner came running back not knowing what was wrong. I was finally able to gather the words “my bear spray”. He grabs all of our water bottles and bladders and dumps it all over my body. We managed to get down into a creek and to try to wash it off. I was in so much pain that my body was forcing me to scream, I didn’t think I was going to survive or make it off the mountain.

My partner came back after digging a place for a tent and I try to scramble up this scree cliff in the dark with no contacts. I crawled into my sleeping bag and tried to sleep. All night long I was so cold but my flesh felt like it was melting off of me. It was the worst night of my life. The next morning I tried to put a new pair of contacts in but it was excruciating. Unfortunately, I forgot my glasses and I knew I was going to have to hike out somewhat blind. We had 0.3 miles of bushwhacking left and 6 miles back to a road. My lungs were so sore and the pain continued all over my body. The sun made it a thousand times worse. I continually felt like I was breathing bear spray, I could taste it. I tried to get myself and my pack over trees and other obstacles but all I could see were large blurs. I was bushwhacking when all of a sudden I felt stinging everywhere.  I started screaming in pain, but I had no idea what was going on. My partner told me to run because wasps were stinging me everywhere. I was stung over 25 times. When we finally reached the trail, I cried. Thankfully a trail crew had cleared the trail very recently; if they hadn’t I don’t know if I could’ve made it out.

I feel very lucky to have walked away, especially with my vision. Working for the Montana Conservation Corps has been life-changing and this experience has made me realize the importance of what we do. It gave me so many opportunities and experiences that shaped who I am. Coming back to work was not easy but I know it has made me a stronger person both mentally and physically. It was super rewarding to finish my term and to learn I am stronger than I think I am.