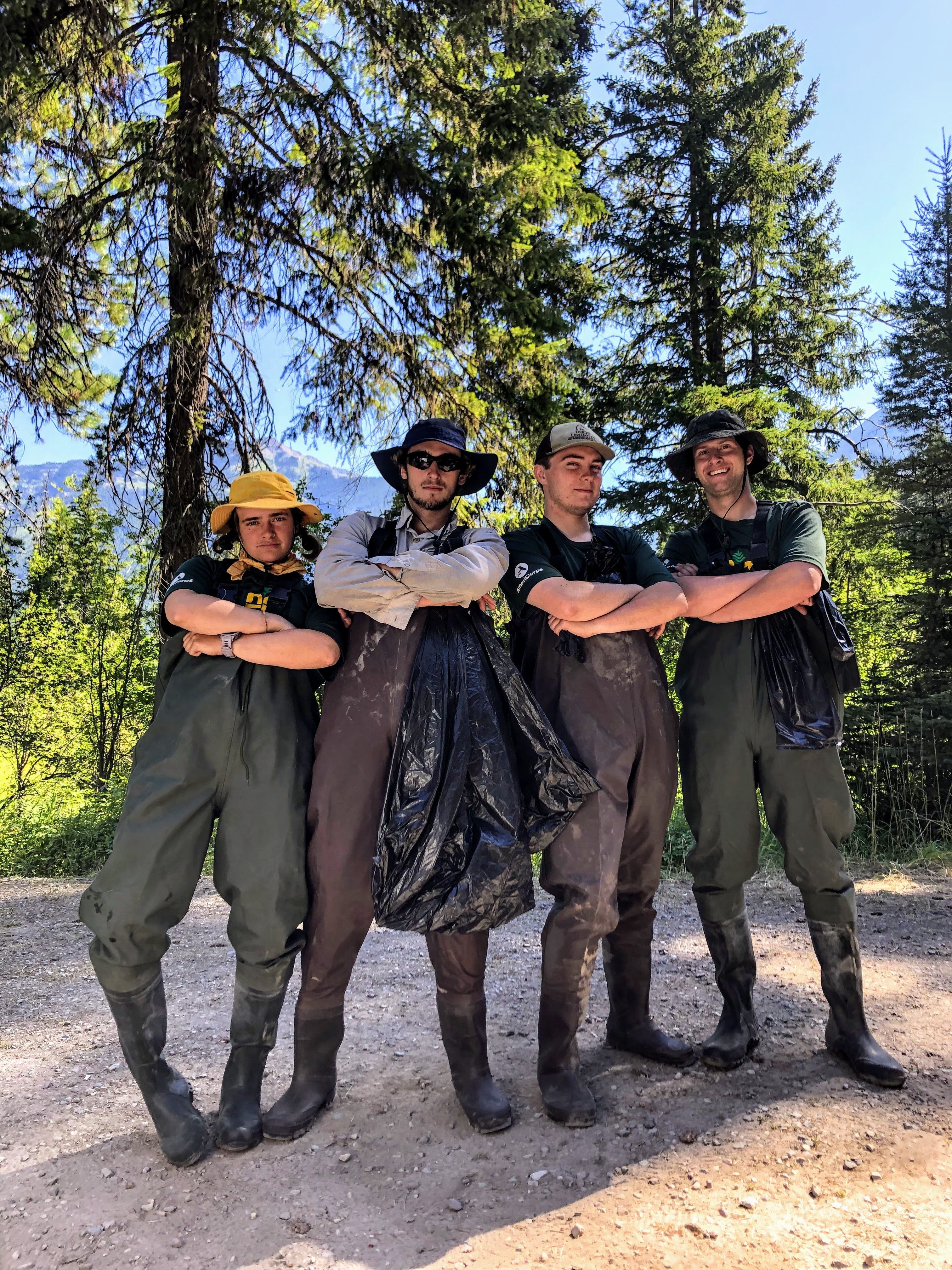 Standing in hip-high waders, Francie balances precariously on the soft, muddy bottom of Holland Lake. Skimming the underside of the large floating leaf in front of her with her fingertips, she searches for the stem. There! She follows it lower and lower into the cold lake water, all the way down to the goo at her feet. Carefully, she worms her fingers deep into the mud and digs out the root. Sweet success! She triumphantly whips the freed plant above her head and into an awaiting black trash bag. Today, she is entirely focused on one thing: seeking out and destroying invasive water lilies.

Back in early August, Francie and her crew spent a week clearing invasive lilies from Holland Lake – an effort to keep the lake cold and healthy for bull trout and other aquatic species. “This was the most fulfilling hitch I’ve had with MCC,” said crew leader, Francie. “Unlike our previous hitches clearing backcountry trails, we were managing weeds to help countless plants and animals, and the environment as a whole. It felt like we were doing more for the world.” In total, they collected 40 large trash bags!

As they walked the length of the outflow stream, a Holland Lake resident checked in with the crew. The woman observed that her family had owned the house for 30 years and had seen the lilies propagate over time. She had no idea they were invasive. “We were able to educate her,” explains Francie, “as well as a bunch of tourists near the boat dock, about the damage the lilies cause to the lake.”

Flathead National Forest Weed Coordinator, Tris Hoffman, was thrilled with the crew’s work. “The boat ramp looks fabulous! This crew was amazing. Really hard working. They were easy to talk with, fun, engaged, and interested,” she raved. After removing the invasive lilies, Tris assigned the crew to tackle terrestrial weeds in the area.  “The area where the crew was working has a rare plant and a campground where children play, so we can’t spray herbicide,” Tris explained. “But, this weed, hound's-tongue, is toxic to wildlife and they hand-pulled weeds and distributed bio-controls to reduce invasives in an environmentally-friendly way.” The crew also collected over 800 insects for distribution into the backcountry of the Bob Marshall Wilderness to help control an invasive knapweed infestation.

As the last hitch of their AmeriCorps term with MCC, Francie’s crew enjoyed this unique project. “We went from a really fast-paced season of backcountry cut and run trail projects to a slower-paced last hitch. We got to stand near each other and talk and joke. It was a big change of pace that was really needed and a nice way to end the season with each other.”