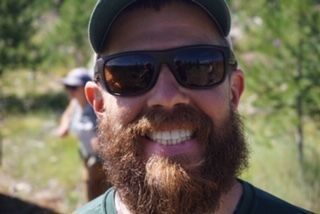 Chris Gaye was born and raised in Essex Junction, Vermont.  After graduating from the University of Vermont with a degree in Secondary Education, he relocated far away from his New England home and landed in Seattle, Washington.  After a few years spent cooking and trying to figure out how real life was supposed to work, he put things on hold and drove out to Georgia to thru hike the Appalachian Trail in 2015.  Upon completion and returning to the Pacific Northwest, his desire to return to the woods got the better of him and he returned to his Vermont home to work as a backcountry caretaker for a season with the Green Mountain Club in 2017.  Deciding between another long hike and trying out life in the west somewhere new, he relocated to Missoula, Montana, and quickly took up with MCC Western Wildlands region as a youth crew leader, and Home Ignition Zone crew leader in 2019.  One season led to another, and he returned as a field crew leader in 2020, working on trails all over western Montana and in Idaho. He’s excited to begin his next season and new endeavors as a field coordinator in Kalispell.  When he’s not working, Chris enjoys trail running, mountain biking, sleeping in the dirt, listening to records and drinking coffee.