Back for More with Big Sky Watershed Corps! 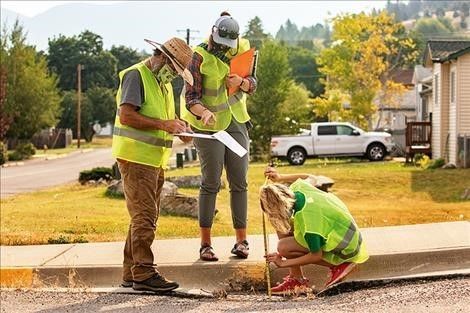 Isn’t one year of AmeriCorps service enough? Meet Emilie Henry, an MCC Big Sky Watershed Corps (BSWC) member returning for her second season with more experience and determination than ever to get things done for the Flathead watershed.

Emilie is serving with the City of Kalispell and the Flathead Basin Commission. She grew up all over the U.S. but most recently calls Pennsylvania home. After graduating in 2019, she stumbled across BSWC and was drawn to the program’s focus on professional development. Over a year later she is well into her second term with BSWC and is loving the growth and depth that a second term allows.

This term, Emilie is excited to continue working on a stormwater project she began last year. Bodies of water in the Flathead Valley are facing more pollution as the population grows and tourism rises. Much of this pollution comes from nonpoint source pollution, or pollution from multiple sources such as agricultural activities, septic systems, litter, and residential runoff. Rain washes this pollution into the local stormwater system where it is not treated before entering streams and the crystal clear waters of Flathead Lake. “The overall goal of this project is to figure out where and what water quality remediation measures relating to nonpoint source pollution would be most beneficial to water quality in the Flathead watershed,” she says. Last year she spent most of her term collecting data for this project, creating an inventory of current stormwater infrastructure, and identifying high priority areas for improvement. This year she is focusing on implementing on-the-ground projects to improve water quality, while continuing to collect water quality data throughout her term.

And if these projects weren’t enough, she is also working on some watershed education and outreach campaigns to improve the involvement of residents. One of these is the Flathead Rain Garden Initiative which empowers residents to reduce nonpoint source pollution by building rain gardens on their property. Another program is an Adopt-A-Drain campaign which recruits Kalispell residents to clean storm drains to reduce the amount of debris flowing into streams.

Coming back for a second term has given Emilie the opportunity to continue to build upon the projects she started last year, and impact the community in an even more meaningful way. “Having the opportunity to spend ten more months further developing the projects I began and building on the knowledge I gained last year is really invaluable. I was able to start my second term with the skills, connections and know-how to really hit the ground running,” she says.

Emilie cites collaboration as one of the most foundational skills she learned last term. With so many great conservation organizations in Montana, she says, “it wasn’t until I began leveraging their knowledge, experience, and resources that I was truly able to do the best work possible for my host sites. Making those connections last year was key, and I hope to strengthen them and leverage them to be an even better watershed steward during my second term.”

With these solidified connections and a strong foundation of previous project work, Emilie notices a sense of newfound freedom at her host site to personally tailor her workplan to her interests. “My host sites have clear goals that they would like to see me meet by the end of my term, but I have much more of a say this year in how I get there, which is both liberating and a little scary (but a good kind of scary)!

Emilie can already pinpoint some major takeaways from her experience that she will bring with her into her next steps. Last year she found that leveraging the expertise of her fellow BSWC members was helpful in her own work. For example, last year fellow BSWC members helped her map Polson’s stormwater system. It was mapped when it was built in the 1950’s, but upgrades and additions were not well documented. These members served as group leaders and were trained on the data collection methodology prior to the event. Then they led pairs of volunteers around downtown Polson and assisted them with data collection. Emilie also plans to lend help whenever she can. “Every member is doing such amazing projects, and taking advantage of every opportunity to volunteer and help out with those is a really great way to gain experience and make lasting memories. The connections I made and experiences I had with other BSWC members were the highlight of my term last year, and I intend to make more this year,” she says.

Not only will she have her network of BSWC alum to utilize moving forward, but she is also developing a number of tangible skills that will be assets for her future career. Emilie cites mastery of ArcGIS, communication skills, and self-assurance as her three most valuable outcomes. She reflects, “even when I’m in unchartered professional territory, I have the confidence in my abilities to rest assured that I’ll figure it out. For all these things, I’m extremely grateful to BSWC.”