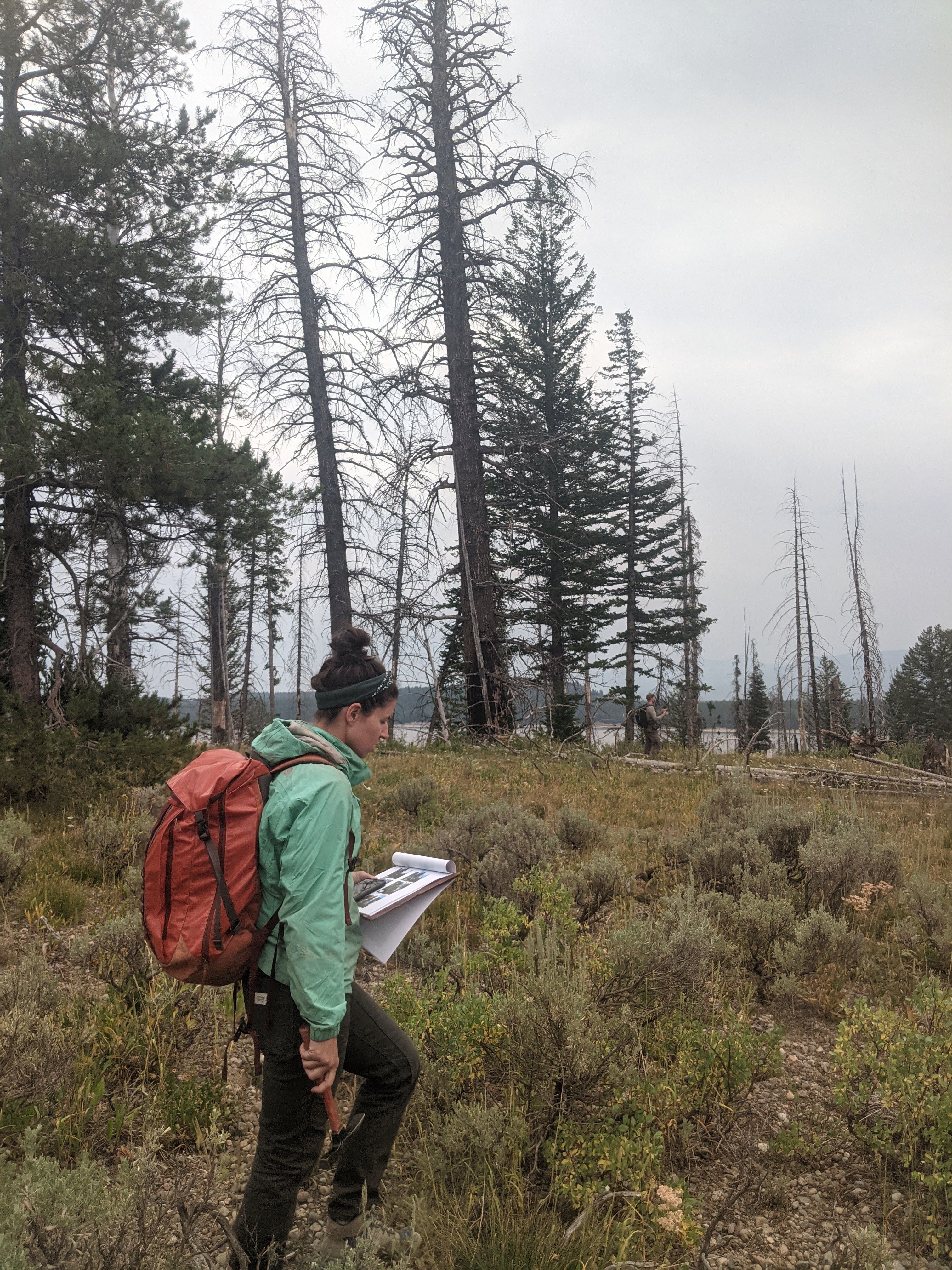 This hitch, we had the opportunity to participate in ongoing fire ecology research at Grand Teton National Park (GTNP).

The Fire Effects Crew is a specialized group within Teton Interagency Fire that performs a variety of fire-related tasks outside of direct firefighting, including tracking and reporting fuel moisture (the dryness of live and dead grass, shrubs, and timber) throughout the fire season. On previous hitches, we have gone out with the Fire Effects crew to take samples of fuels in various areas of the park, from cuttings of Idaho fescue grass to core samples of downed dead logs. Fuel moisture data help the agency predict local fire risk and contribute to larger national databases on wildfire preparedness. Every 4th of July, the Fire Effects crew makes recommendations as to whether the fireworks show should occur at Snow King Mountain in Jackson based on how dry the fuels are in the area.

In addition to fuels monitoring, the Fire Effects crew performs research on the impacts of fire on the landscape and the organisms that live there. In 1981, the Mystic Isle Fire burned an area of GTNP, and in 2009, the Bearpaw Fire burned over this previously burned area. This re-burned area allows us to ask some interesting questions about how an area responds to more frequent fire. One of their main research questions: how do trees respond to concurrent fires? Although trees like Douglas fir are considered more fire-adapted, having thick bark which can insulate them from the intense heat of a wildfire, there are still many unknowns about how much fire or how many consecutive wildfires a Douglas fir can withstand. This knowledge will inform our understanding of how an area recovers after a wildfire, especially with regards to which species survive or die and how this may open up spaces for other species to move in (including invasive species).

We met up with fire ecologists Diane Abendroth and Erik Kramer of the Fire Effects crew one morning to check in on some trees. After the Bearpaw Fire, the crew made an inventory of trees that survived the burn, taking photos, tagging, and collecting information about the location of the trees. The crew has been returning every couple of years to document which trees are still alive and which have died.

We split up into two groups and went on the hunt for the trees, using maps, compasses, GPS, and previous photos of the trees. Once we located the trees, we collected information on if the tree was live or dead, then lined up our camera to take a near-identical photo to the previous photos of the tree. Some trees that appeared healthy and vigorous in the previous sets of photos were now dead, some even snapped in half and down on the ground. Others were still surviving and thriving.

At the end of our time together, many of us were brimming with questions and wishing we could keep on inventorying with Diane and Erik. We are very thankful for the opportunity to participate in this project and for all of the questions the fire ecologists answered. I wouldn't be surprised if some folks pursued work in fire effects in the future…