Second To Last Hitch for the Meeteetse Millionaires Club (MMC) 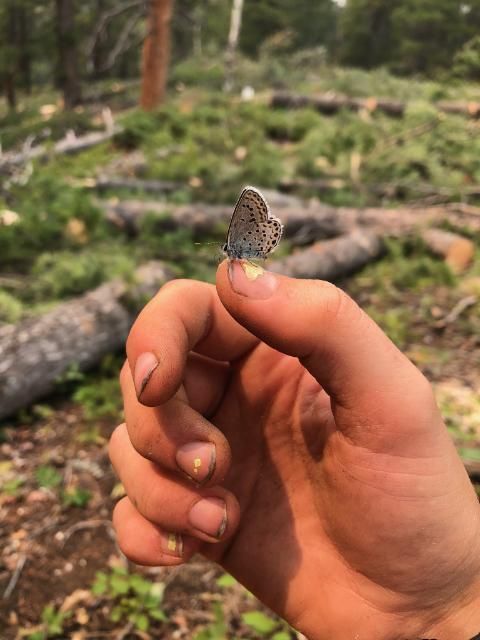 This week the Meeteetse Millionaires Club ventured back to the scene of their collective saw certs; Markham Draw, Wyoming. After half of a day on straightaway sagebrush highways we collectively braced for the dusty two-hour ascent up the mountain road that led to our aspen-speckled campsite and to the split tree we cut into a pair of wooden shorts that had been standing at attention since we were last here in June. This once-unfamiliar dot on the map now carries a sense of belonging that I think we all leaned into as we spent our hitch clearing conifers from stands of quaking aspen trees whose leaves waved hundreds of tiny hellos as we brought exponential slices of sunlight to their branches. Now at the peak of the summer, every wildflower stood in bloom and was adorned in at least three butterflies.

There is an unspoken flow between the Meeteetse Millionaires that has developed beautifully and organically over the last three months. It is a slow-growing social succession, a supportive and selfless serving of the whole, a collective slide down the learning curve of living within this experimental community of conservation and of futures in fire. It seems we are functioning as a single amoeba, exponentially shifting and reforming to understand the needs of our group. Basically, we are really good pals. And we also chainsaw stuff really well together. A rare combo, as it were.

As with many things in life, it can be difficult to fully realize the power an experience has given to you until it is coming to an end. I can rearrange this summer into many definitions; three months, a fourth of a year, a 450-hour AmeriCorps term, a season, but no definition elongates my brain enough to wrap my head around what this summer has been. I am so endlessly proud of all of the little fellers around me and I am confident in what we can bring to our first fire assignment together on a 20-person BLM hand crew that will be shooting off to in an unknown direction in a little over two weeks time. The smoke obscuring the mountains tells us there is work to do.

On the menu for next hitch: Momo’s Thing x 8