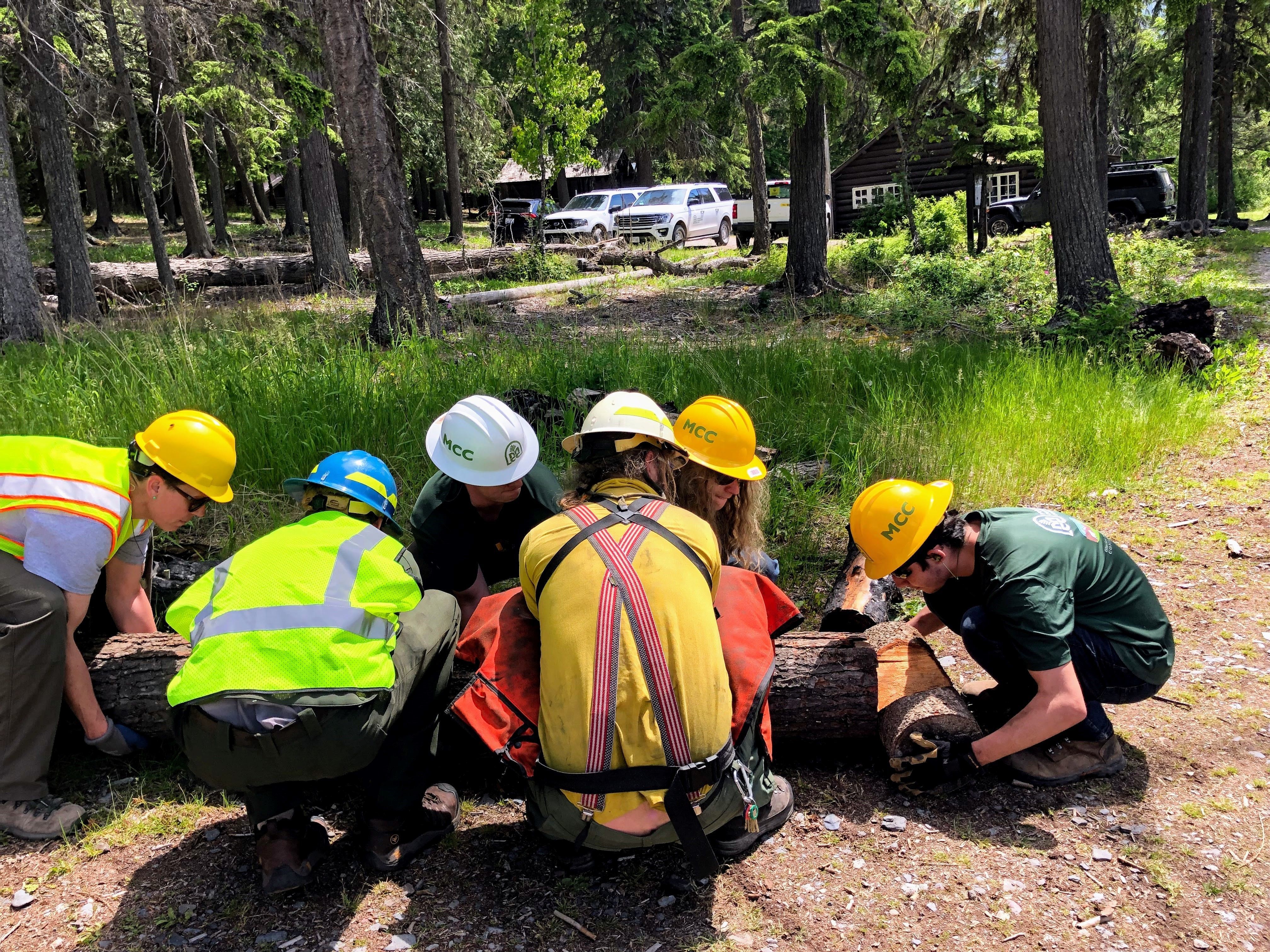 “Watch out for square holes, rusty nails, and old cans,” our project partner, Morgan, explains the hazards associated with working at a historic archeological site. Lake McDonald laps over downed wood to our left. Our crew nods along, eyeing the fire team’s sheathed chainsaws and patterned suspenders with light envy. We should watch for tripping hazards, we conclude.

It’s our first day of “fuels reduction,” which, prior to the start of hitch, had been jokingly explained to my co-crew leader and I as “picking up sticks,” usually near buildings. After eight days of spotty morale, I was worried. In my head, I’d imagined our team of teenagers would be working in temperatures just shy of triple digits, likely in a shadeless parking lot of an administrative building. The so-called sticks I had envisioned were the width of two fingers at most. Important, but potentially emotionally difficult labor for six high schoolers who were beginning to grow weary of peanut butter tortilla wraps.

Our first day of fuels proves to be yet another reminder that assumptions are meant to be challenged.

Individually, the high schoolers begin embodying this by degrees. Behind their tinted safety glasses, I sense my crew members’ eyes lighting up as the first chainsaw began to bite wood. This is novel. Every few minutes, orange chaps and gloved waves beckon. My crew members lift armful-sized logs—together, often, but individually when sun and rot make for unusually light timber. Sore wrists and tired legs help guide them to the understanding that grabbing a friend lightens loads and hearts alike, especially under high noon.

One of the fire crew members, Brian, explains the logic behind bucking particular pieces of wood. Some have too much airflow underneath—fire would spread and ignite them too easily. Some were previously felled hazard trees and have obvious cut marks; they are bucked into smaller pieces and removed to disguise the evidence that this lot is anything other than self-managed wilderness.

When the saws are running, we shuttle previously cut limbs to roadside piles that grow nearly as high as I am tall. By the end of the first day, we have cleared nearly an acre of felled logs. A week ago, they were strangers; the hour-long drive to our campsite was stilted and quiet. Today, I watched and worked alongside them as they huddled two-by-two around “tree cookies,” gingerly stepping over and around debris. As we begin gathering our belongings, the lesson that we’ve learned slowly and haltingly throughout the week has become evident: in togetherness there is power—and togetherness does not leave the individual behind to succeed. Each member of our team has brought different strengths, weaknesses, senses of humor to every day of our work. And yet together, they are utile, capable, and durable. Together, they are a community.