Matchsticks in a Heatwave 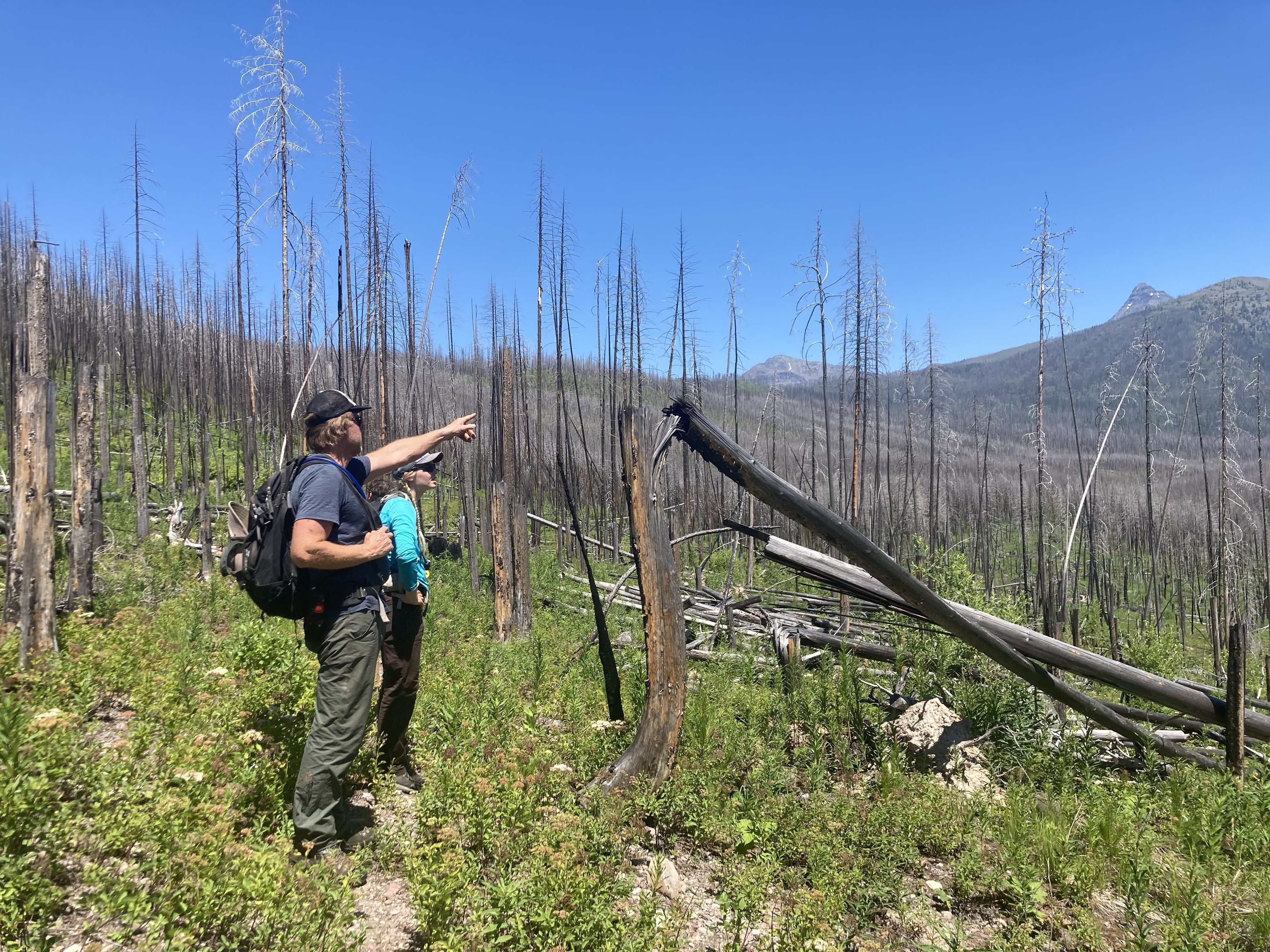 After five days of brushing the South Boundary Trail along the Flathead River, Glacier Crew No. 1 was rewarded with a memorable day hike to an unconventional destination: the site of a devastating firestorm.

Fires are an ecological phenomenon – while certainly destructive, they act as a regulating mechanism for a region’s forest ecosystems. Glacier has at least one major fire on record for every year of the park’s existence besides 1964. While early park policy favored all-out war against the fires, officials have since come to understand their ecological benefits, and have developed more nuanced criteria for choosing which fires to fight. Some fires, however, demand the park’s attention.

2003 was one of the worst fire years in the history of Glacier National Park. June, normally the park’s wettest month, saw a series of early heatwaves that began drying out Glacier’s vegetation well before the normal fire season. By the end of the summer, six major fires had burned more than 136,000 acres of park land – an all-time record. Our project partner wanted us to see one of the major burn areas from that fire season with our own eyes.

On the day of our hike, the weather was pushing 95 degrees. We headed north along the east side of Lincoln Creek for three miles before reaching the creek crossing. Now on the west side, we hiked a further mile and a half through brushy terrain, eventually reaching the downfall from a more recent burn, this one from 2017 (the same fire season that destroyed the Sperry Chalet). Navigating the fallen trees was tough – no path had yet been cleared. But we pressed on through the littered landscape until the trail was passable again. We were in a forest of lodgepole pines, with good tread, a shady green canopy, and the reddest Indian paintbrush I’ve seen in Montana lining the trail.

Then we crested a ridge, and the hill became a skull. The forest was suddenly flat-faced and black. The tallest objects were spires of charcoal which crumbled to the touch. Besides us, nothing breathed but the startling green vegetation that rarely reached our knees.

A firestorm is a fire of such intensity that it creates its own wind system. The burn produces buoyant gases that rise with such a force as to draw in massive amounts of air from the fire’s perimeter, further fueling the fire and creating gale-force winds. Usually, firestorms are naturally occurring, but they are comparable in formation and devastation to the fires that ravaged Tokyo, Dresden, and Hiroshima as a result of nuclear and conventional bombing during World War Two.

The result was an honest-to-God blast zone. Thousands of heat-weakened trees had been decapitated by the wind, leaving in the ground ten or fifteen feet of charred matchstick; it was as if the hillside had been brutally shaved. Other trees that had remained upright were curved and warped into horrible Dr. Seuss designs. The effect on the observer was something like vertigo.

There was only one question to ask, standing on that shadeless slope, sweating out the rays of that awful afternoon: isn’t it a little bit hot for June?

Colleen Haskell, a fire weather meteorologist at the Northern Rockies Coordination Center, says this month has been a cause for concern. “This is going to be drying out even our highest elevations where typically we have a little bit of a buffer and we buy some time going into fire season.” As July begins, and the heat only slightly abates, the image of that hillside looms large in the back of my mind. Sometimes, fear ignites a poem:

“Burnt face of mountain,
when will you smile again?”
“In one thousand years.”