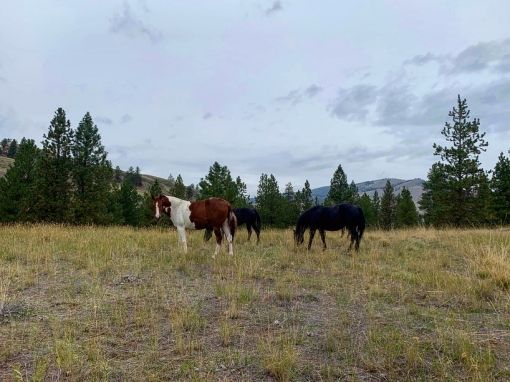 Are they wild, or just feral? The namesake of the island would suggest the former. Located on the west side of Flathead Lake, Wild Horse Island is famous for its wildlife. From world-record Big Horn Sheep to herds of Mule Deer, and of course the horses. People come from far and wide to get a glimpse and hopefully, snap a shot of the island’s wildlife.

The harsh reality is that there is no such thing as a wild horse in the United States. Although they evolved on the North American Great Plains thousands of years ago, they have since gone extinct to later be reintroduced by Hernán Cortez and the Spanish empire. So, despite our notion of horses being an integral part of Native American culture for centuries, it doesn’t seem to be based in fact. The horses of today’s America are not wild but feral; lineages of domestic horses that have escaped.

In spite of what I’ve said, it’s also true that the horse did become a very important part of Native American culture. After all, Cortez brought those first 16 horses to the Americas in 1519. Slowly, that cultural exchange made it all the way up from the Spanish Empire in the Caribbean and Mexico, up into the Rockies to modern-day Montana. It’s here that the Kootenai tribe would swim horses over to the island in order to protect them from raiding tribes. So, maybe we can at least consider the horses wild in that they’re a vestige of the old Wild West?

The answer is an unfortunate no. There are only five horses left on the island. Four of those are from a ranch where, albeit being out to pasture their entire life, were still from a ranch. The only horse born on the island is a paint horse who was never supposed to exist. When the other horses were brought on they were chosen to be all female and given abortion shots as to make sure no more horses could end up on the island. Apparently, one slipped through the cracks and got pregnant and thus there are 5 horses. Luckily, the new calf was also female because the managers at the park are extremely worried about overpopulation. That’s right, five horses do more damage to the island than hundreds of Big Horn Sheep and Mule Deer.

So, how ought we reconcile the feralness of Wild Horse Island? Do we change the name? But, then we’re liable to rename places such as Buffalo New York. Do we take off the horses? But, isn’t that the draw to the island? Isn’t that what brings the tourist? Although, you could bite the bullet and say fewer tourists to degrade the island is a good thing. Or maybe, we aren’t obligated to do anything more than continue to learn about the island’s history, to protect its current beauty and preserve it so future generations can butt heads with the same issues we find so fascinating.