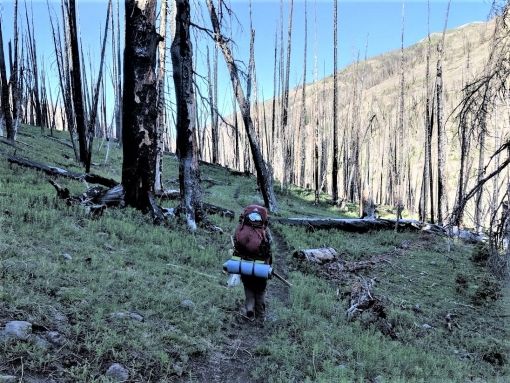 We packed all our crew food for those nine days on our back along with our usual camping gear and working tools. Then we headed out towards the forest.

The first thing we did was cross a wide section of the river. We hiked and worked for the usual 10 hours. The last portion of the hike required us to cross another section of the river, although by now the temperature had dropped significantly. Once we crossed we immediately set up camp and started a fire and ate food. Which was exactly what we did.

The next morning started out like a regular workday. We packed up all our gear and ate some breakfast. Little did we know, that our day was scheduled with not just one but two passes. We logged out some trees with the cross-cuts and brushed the parameter. Then quickly learned our second campsite was much farther than originally anticipated. To get there before sundown we’d have to go over two passes and mostly hike for the remainder of the day. At first, a little smile sneaks in, because we won’t have to take on and take off our heavy packs every five minutes for the rest of the day. But that didn’t last long.

Everyone was doing pretty good going over the first pass, but with all that incline you can tell it wore some people down.

We take a small break for lunch and try to stay warm. The wind was brutal.

Our leader was quickly back on his feet ready to start the second pass. Now this one was similar in distance to the first one but twice as challenging. I’m pretty sure my pack was now twice as heavy as well. The second pass had a rotation of people near the front. You could tell when people were getting tired or frustrated they’d stop and tell you to pass them so that they could sneak in a small break before their next step.

This surprised me because the people I assumed to be the most physically fit were slowing down more and more. And I realized this hitch was going to be all mental. The worst and best part of the day was the physical challenge. Throughout the day everyone was being incredibly supportive and encouraging their team to keep going. All the positivity gave me the strength I needed. We yelled and grunted to make those last few difficult steps over the pass. It was fun to see how far we had pushed ourselves.

The rest of the hitch was just as mentally challenging. Probably my favorite hitch out of the whole season.