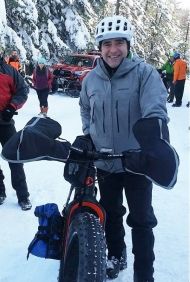 Pierre enlisted in the U.S. Army for three years before attending college at the University of Boulder-Colorado where he earned a BS in Accounting. He is a graduate of the Pacific Coast Banking School at the University of Washington in Seattle. Over the years, he's held several positions at banks, including various branch management positions at the National Bank of Alaska, and he is currently the Market President of First Montana Bank in Kalispell. Pierre is an active volunteer in his community, working with nonprofits including Cancer Support Community of Kalispell, The Flathead Land Trust, Glacier National Park Conservancy and Camp Make-a-Dream. He is married to Dr. Melissa Hulvat and has two children, Julian and Pierre III. He enjoys getting outside and hiking, biking, rafting, motorcycling and hunting.